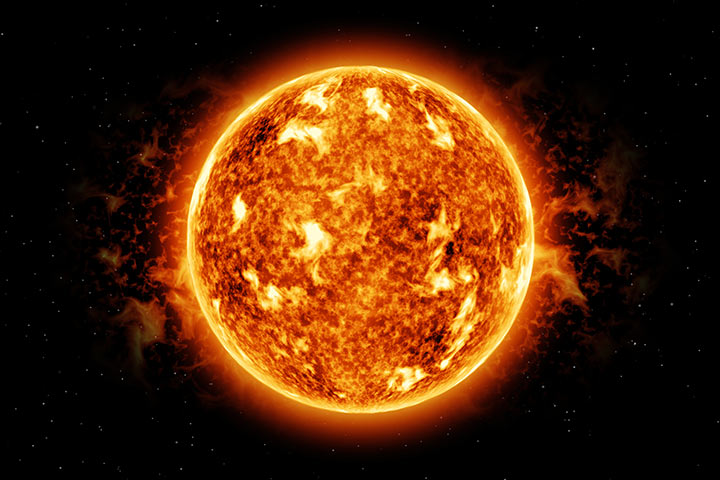 What is the Sun?

The Sun is actually a Star. Stars are massive nuclear reactors that generator energy from their core.

How far away is the Sun?

It is 149.6 million km away from the Earth. It is the heat and light from the Sun that is responsible for life on Earth. The huge gravitational pull of the Sun keeps the planets of our Solar System orbiting around it.

How big is the Sun?

The Sun is roughly 1.4 million kilometers wide. To give you a better idea of how big that is, 100 Earth’s can be spread across the width of the sun and one million Earth’s could fit into it!

How old is the Sun?

How long will the sun live?

The Sun will remain, more or less the way it is now, for about another 5 billion years. After that, it will exhaust the hydrogen it currently burns and will enter a new phase of existence. During this phase the Sun will begin burning helium and will expand to about 100 times its current size and become what is called a red giant. Once it runs out of helium it will collapse into a much smaller object called a white dwarf.

How hot is the Sun?

The center of the Sun is about 10 million degrees. The surface of the Sun, called the photosphere, is at a temperature of about 5800 Kelvin. Sunspots are cool regions and they are 3800 K.

What is the Sun made up of?

What are Shooting Stars?

Shooting Stars are not real Stars at all! They are meteors made up of particles of rock and dust that shine brightly as they burn up in the Earth’s atmosphere.

What is a Galaxy?

A Galaxy is an enormous group of stars held together by gravity. There are three different shapes of Galaxies, spiral, elliptical and irregular. We live in a Galaxy called the Milky Way and it is a spiral shape. There may be 100 billion Galaxies in the universe!

What is an Eclipse?

What are the planets orbiting the Sun?